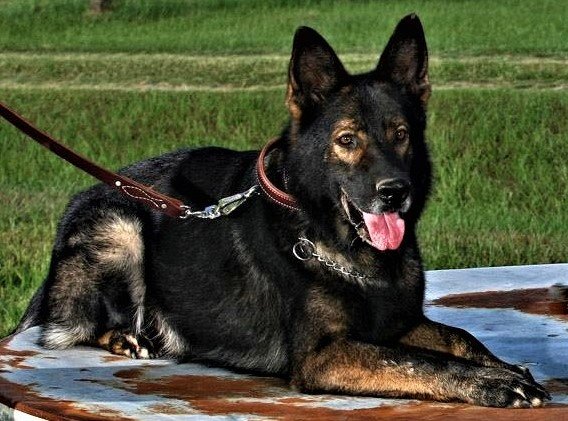 Yago is out of the famous Grafental blood lines. His puppies are proven for all types of jobs, from Search and rescue, Service dogs, Sport, Personal protection and many more.  (Retired) 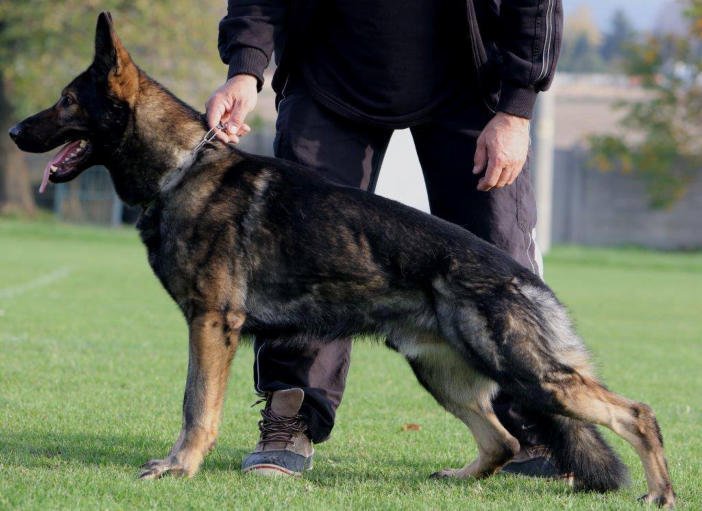 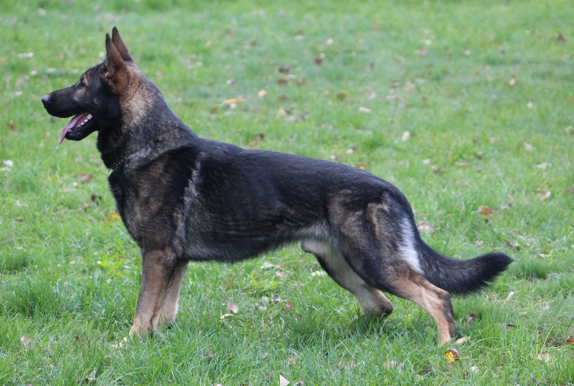 SKJ, FCI, SG, BH/VT, IGP1, HD-A1, ED-0, DM-N/N
(Slovakian Import) We are pleased to have Jerry Lee Cevaro as our newest breeding male here at Coyote Creek Ranch Working Line German Shepherds. This guy is a very handsome male who is a strong representation of the German Shepherd as a breed. Jerry Lee boasts a nicely put together pedigree. When it comes to drive, Jerry Lee has an endless thirst for toy, prey and food. This dog has tons of heart and possesses a strong desire to work while maintaining a clear head. He is an incredibly well balanced dog who we know will bring a lot to the Coyote Creek name and to our amazing clients. 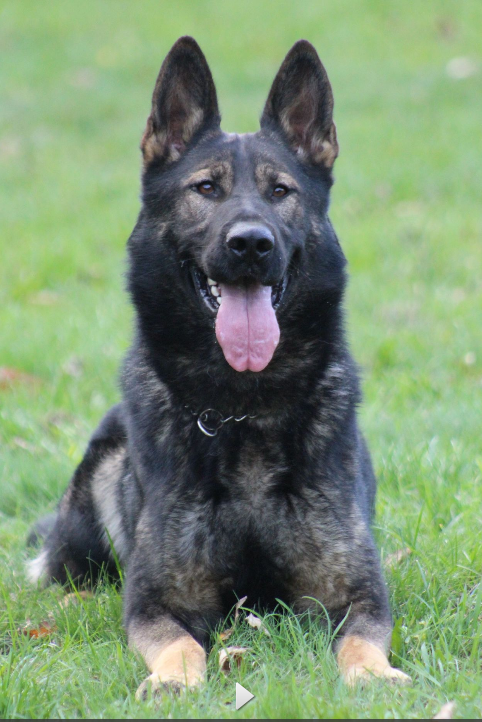 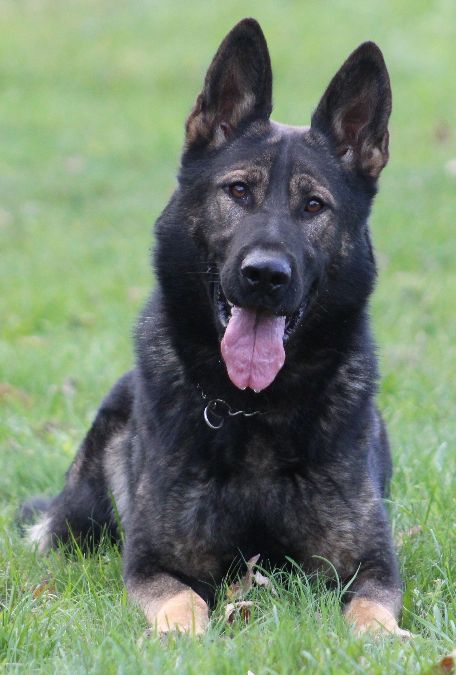 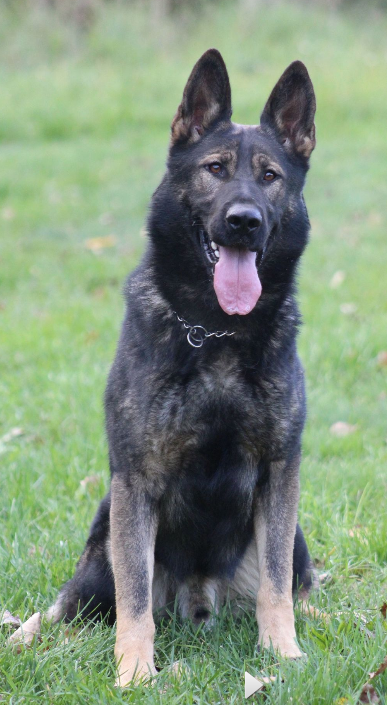 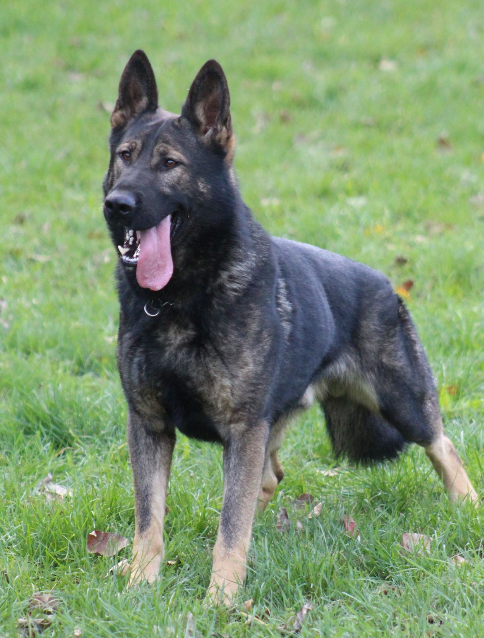 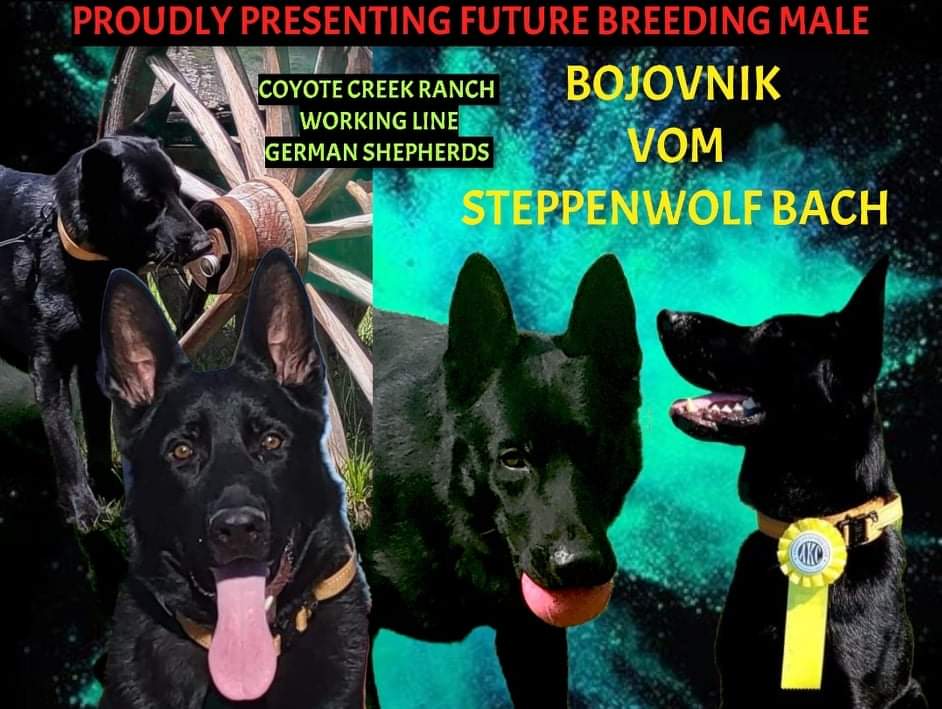 We are proud to announce Bojovnik vom Steppenwolf Bach “Bojo” as our newest breeding male. Bojovnik comes from Yago vom Felsschlucht Bach and VD Lara Katargo BH/VT, SVV1.
Bojovnik is a well tempered male who has good nerves, high drives, a very loving disposition and a nice temperment. He loves to use his nose which led him to his passion of scent work, which is only second to food in his book. “Bojo” is still currently training and competing in scentwork while also training in obedience.  At his first competition, he achieved two qualifying scores, one in Novice Interior and one in Novice Buried as well as a 3rd place in the division.
At this time Bojovnik has earned his Virtual Home Manners Puppy as well as his Virtual Home Manners Adult titles and is in the progress of adding more to his list of accomplishments.
While he is well known for his amazing structure and awesome personality, Bojovnik vom Steppenwolf Bach also boasts a stunning pedigree. He comes from our breeding program here at Coyote Creek Ranch Working Line German Shepherds. His sire is our  beloved Yago vom Felsschlucht Bach and his dam is the spectacular VD Lara Katargo BH/VD, SVV1. Looking at his pedigree you will find some amazing dogs including but not limited to V Chris Spod Lazov FCI WORLD CHAMPION 2013, WUSV Universal Sieger, Slovakian Working Champion, IPO3, 2X WUSV, and V Faro Demin dvor SLOVAKIAN WORKING CHAMPION 2011, IPO3, SCHH3, WUSV 2010 15,  FCI 2010 9°, WUSV-UNI 2011 3°, CACIT.
His pedigree also includes dogs such as Mirko vom Grafental SCHH3, FH1, V Don vom Clausberg SchH3, IPO3, FH2, V Sven vom Gräfental SCHH3,V Drago Eqidius IPO3, SVV1, SCHH3, SG Darka Va-Pe SVV 1,V Cato Katargo 3*WUSV,1*FCI,VICEMISTR SUCHNO 2007 , CACIT, IPO3, SchH3.

We are proud to have such an awesome male to carry on his bloodlines.